The Coronavirus Relief Fund (CRF) was established through the CARES Act as payments to State, Local, and Tribal governments to navigate the impact of the COVID-19 outbreak. Hawaii has received $1.25 billion in CRF funding, with the Office of the Governor and the City and County of Honolulu as “Prime Recipients.” All entities – e.g. state departments and agencies - that receive CRF awards from the Prime Recipients are “Sub-Recipients” of CRF.

This Guide – prepared by the Department of Attorney General and the Department of Budget & Finance - is designed to assist Sub-Recipients of CRF funds allocated to the Office of the Governor in complying with key legal and regulatory requirements associated with the management and use of CRF funds. It explains eligibility and reporting requirements, as well as oversight and accountability framework.

Governor: As a Prime Recipient of CRF moneys, Governor Ige develops the overall strategy on how CRF can best be used to help the people of Hawai‘i.  In consultation with the Legislature, Governor Ige approves all use of CRF allocations and disbursements.  Governor Ige’s top three priorities for the use of CRF are:

Chief of Staff: Chief of Staff implements Governor Ige’s strategy for use of CRF by directing and coordination action among the departments of the state government.

Authorized State Official (“ASO”): In consultation with the Chief of Staff, the ASO acts on behalf of the Governor to coordinate department level actions and provides support to departments using CRF funds.  ASO reviews and recommends to Governor approval of department proposals for use of CRF fund and coordinates the establishment of accounts and the transfer of CRF funds to departments. Robert Yu, Deputy Director of Budget and Finance, has been appointed the Authorized State Official.

Department of Accounting and General Services: Ensure that CRF moneys are separately accounted for; assist the Office of Federal Award management in meeting CRF reporting requirements.

Department Heads: develop plans for use of CRF consistent with federal guidelines; attests to eligibility  of fund use and existence and effectiveness of fund management controls oversee the implementation of plans as approved; report data as required; monitor for fraud, waste, and abuse and report suspicions B&F and the Department of Attorney General.

CRF may only be used to cover expenses that—

“Incurred due to” the COVID-19 emergency:

The Cost is not accounted for in the March 27, 2020 approved budget if

For examples of eligible and illegible expenses, click here.

Please do not hesitate to raise eligibility questions to the Deputy Attorney General responsible for advising your department and/or [email protected] at the Office of Federal Award Management.

The CRF allocations account in this Guide refers to the allocation of funds made from the $862,823,978.80 received by the Office of the Governor on May 15th, 2020.  CRF funds are allocated by Governor’s administrative action in response to the COVID-19 emergency and by legislative appropriation in Act 8, Session Laws of Hawaii 2020 and Act 9, Session Laws of Hawaii 2020.

On May 22, 2020, Governor Ige issued Executive Memorandum 20-04 – Management of Coronavirus Relief Fund, describing how departments may develop plans to use CRF funds to address the COVID-19 health crisis.  Departments requesting funds must complete:

Form CRF #1 – Request for Use of Coronavirus Relief Funds – In this form. department heads provide the following information:

Department heads are strongly urged to consult with the Department of the Attorney General in the preparation of the forms, as well as in the planning and execution of CRF funded projects and expenditures.

CRF funding requests are reviewed and approved through the following process: 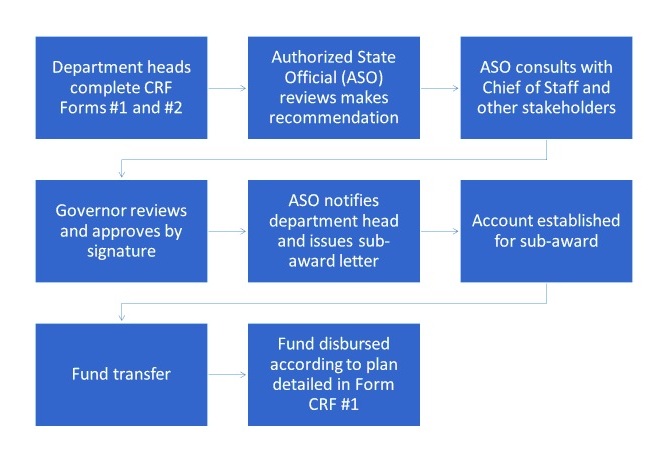 The Authorized State Official provides oversight of subrecipients through in-person calls, review of program documentation, and review of encumbrance and sending information.

To ensure transparency, information about how the federal funds are being awarded is posted on the State Department of Budget and Finance website and the Hawaii Data Collaborative website.

Use of Reported Data: The data submitted is used to

The State has implemented enhanced accountability measures relating to the management and use of CRF awards, including:

The Hawaii Data Collaborative (HDC) has partnered with the Office of Federal Awards Management (OFAM) to review and cross check award and expenditure information received from state departments and agencies.

To ensure both usefulness and transparency of the data, HDC has created a federal funds landing page where individuals can download the most recent information and track progress utilizing a number of different data visualization tools.

HDC is also partnering with such government and private sector partners as the House Select Committee on COVID-19 Economic and Financial Preparedness, the Department of Budget and Finance, the Department of Business, Economic Development & Tourism and all of the counties to communicate and track and monitor federal awards statewide that have been received in response to the pandemic.